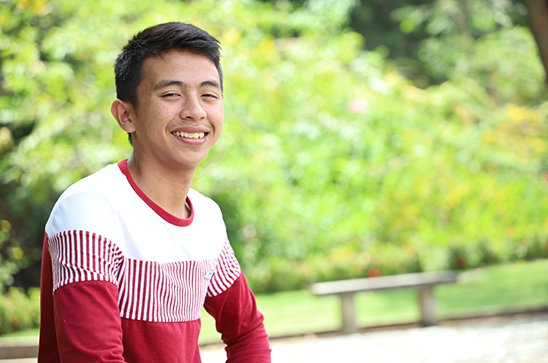 Seeing the difficulties of his female schoolmates every prayer time, 17-year-old Sailani, the school Peace Club president, sought a way to provide a prayer room designated for Muslim girls.

Sailani studies in a Muslim school in Marawi City where praying five times a day is a religious practice.

“When we heard that he is planning to convert an unused classroom into prayer room, I am ok with it. Even other teachers and the principal commended his idea. Who would not?” Salibe Ali, the Peace Club adviser, said.

Ali added that Sailani has been doing a lot of peace efforts in his school. Sailani’s father is a sultan and government employee who also works to promote peace in the city. “Sailani once resolved a conflict between two groups,” Ali proudly shared.

The conflict was between a group of young boys in Sailani’s school and those outside. Sailani met with the groups in his house and talked to them. “I told them, ‘Look at what happened to our city. What good will it bring if we continue quarreling among ourselves now?'” Sailani shared.

Marawi City, the capital of Lanao del Sur, had a five-month-long armed conflict in 2017 known as the Marawi Crisis. The crisis brought by the armed confrontation between the Philippine government and militants displaced 98 percent of the total population of the city and nearby municipalities, the United Nations High Commissioner for Refugees (UNHCR) reported.

After that talk, he never saw neither of the teams hurling painful words at each other online, where everything started and almost got out of hand if not resolved immediately.

Barely two years old, the Peace Club is the newest student organization that Ali established after he attended a World Vision peace building seminar. Three of the Peace Club members got involved in World Vision’s Empowering Children as Peace builders (ECAP), which instills among children and youth the value of respect, understanding and love regardless of age, culture and religion. The three had since graduated, and Ali hopes to train more students on peace building through the Peace Club.

Ali added that forming the Peace Club is not easy because there are numerous student organizations in his school already. “I want to give the students more options on where they could hone their leadership skills. Sailani, for instance, is good at mediating. If not for the Peace Club, he may have limited venue where he can discover, practice and enhance his skill.”

Every year, Sponsored Children Ronald and Gerald are excited to welcome the new school year as it also means receiving new back-to-school kits. For them,...

While everybody seemed to be fascinated with comic book heroes, Ronie found a hero of his own—World Vision.

Over 1,000 Cebuanos got together in the annual World Vision Run last July 16, Sunday, held at the Cebu Business Park.

Children from various provinces in Luzon raised early teenage pregnancy as an important issue among children in the recently concluded Children's Congress.