One month on: World Vision assists over 27,000 people in typhoon-battered Luzon

One month after the twin typhoons, child-focused non-profit agency World Vision in coordination with the local government units and other humanitarian agencies have initially assisted over 27,000 affected people wherein nearly half of these are children in the Albay, Catanduanes, Rizal, Cagayan and Isabela.

“The needs of the families affected by two strong typhoons and the massive flooding in just a month are still significant. As most of the displaced families transition from evacuation centers to makeshift shelters, challenges still remain such as protection issues and lack of access to basic needs,” shares World Vision National Director in the Philippines, Rommel Fuerte.

As of December 04, 2020, a total of 6,427 affected families or 27,400 individuals received support in the form of hygiene kits, shelter kits, household non-food items, food packs, and maternity kits. World Vision targets to complete its reach of 10,000 families in the next two months.

As the response transitions from relief to recovery phase, World Vision is focused on providing support in shelter and livelihood sectors with emphasis on cash-based programming modalities. These include provision of shelter repair kits that include repair materials and carpentry tools and cash assistance for shelter repair.

As a child-focused organization, World Vision is concerned with the welfare of children especially those living in makeshift shelter where need for decent and livable space, protection and hygiene and sanitation in the midst of ongoing pandemic and continuing threat of natural hazard such as typhoon and heavy rains. In the education sector, Department of Education (DepEd) reported about 400,000 learning materials were damaged, adding difficulty for children to adapt and cope with the new normal learning approach.

“We want the affected families and children to feel the essence of generosity and oneness especially that Christmas season is already here,” says Fuerte. “We thank our donors and sponsors who supported our efforts. Let us continue to pray and support for the recovery of the families.” 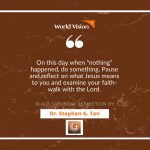 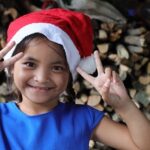 Q: How Will My Gift Be Used? We promise to use your donation in the most effective way possible. Your donation (child sponsors and one-time... 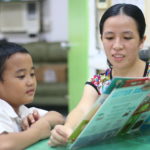 After 20 fruitful years, World Vision bids goodbye to its area programme in Iloilo.