“It was like a dream – a nightmare. It happened so fast. Moments after my children and I got out of the house, it was already burning to the ground.” 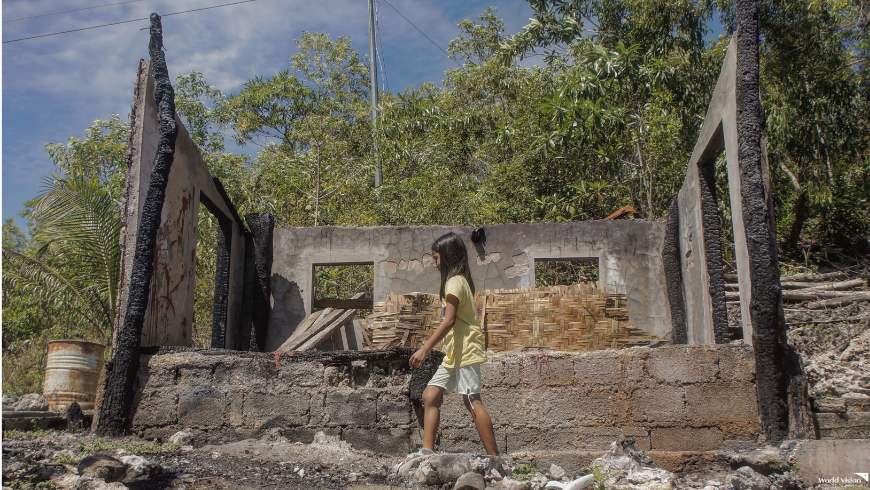 Mary Grace, 10 years old, walks in front of her former house that was burned months ago.

People shouting outside Anita’s house jolted her from sleep. The moment she comprehended what they were shouting about, she immediately dragged her two children outside their house. John, 12, and Mary Grace, 10, were also perplexed of what was happening but they followed their mother. They evacuated further uphill to a wide space where they could no longer feel the heat. As the 47-year-old mother returned to her house, the gravity of what was happening began to sink in.

Their house was ablaze. Anita helped the construction workers who were hurling small amount of water from small plastic containers. It is fortunate that the workers stayed late that night. They were constructing a cement road that passes along near Anita’s house. They were already heading home when they noticed fire and thick smoke coming from the house. That was when they alerted the people inside. If they finished work earlier, no one would probably notice the fire since the next house is kilometers away and it happened in the dead of night. The family considered it as a miracle.

Minutes passed, the flame continued to grow. They stopped putting the fire out with water because it only worsened the fire due to burned, live wires scattered inside the house. Anita and the rest of the group could already hear the siren of the Fire Truck but it was having difficulty getting past the narrow, steep road that was still being constructed. 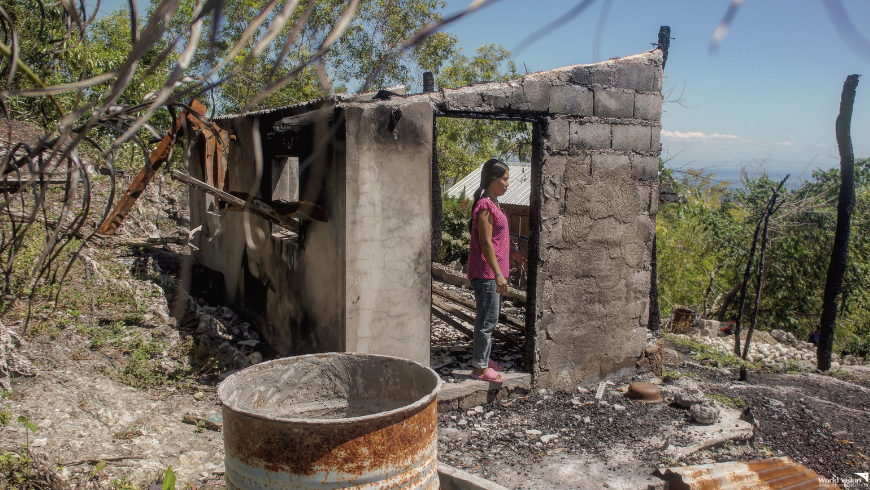 Anita remembers that witnessing her house being burned was the most horrific sight and feeling she ever had.

Anita gave up her hope of saving something from her house. The clothes that she and her children wore that night, and a piece of blanket that wrapped around her, were the only things they saved. “It’s not easy to see a big flame engulfing our house whole. I have seen houses burning in movie scenes but it was way different when I experienced it in real life,” recounts Anita. “It was a very horrifying sight and feeling.”

The spark of fear

Days before the incident happened, Anita remembered that she could smell burned rubber inside their house. She checked her wirings inside and outside their house but she didn’t notice any sparks. However, she still reported it to the local electrician the following day. The electrician wasn’t able to visit her house because of load management but he advised Anita to check the outlets and avoid overcharging. The mother followed and concluded that the smell of rubber being burned was coming from her neighbors.

After the fire, the Bureau of Fire and Protection (BFP) identified faulty electrical wiring as the cause of the incident.

Surviving life after a house fire

After the ash and smoke settled, and only the embers remained crackling, Anita reunited with her children and cooped up together.

Her brother-in-law offered the family to stay at their house temporarily. The neighbors, who came to inspect, disagreed. According to them, it is bad superstition to stay at someone’s house when you are a fire survivor. Anita just agreed to her neighbors to avoid extra discussions and so her children could finally rest.

They stayed under a goat shed. Anita has been raising goats as her livelihood. The shed is a wooden shelter with no walls. An old and rusty iron sheet roofs it. They laid their mat and blanket on the ground and spent the night there. According to the mother, she told her children to look at the clear night sky. It was the only way she said she knew to comfort her children. 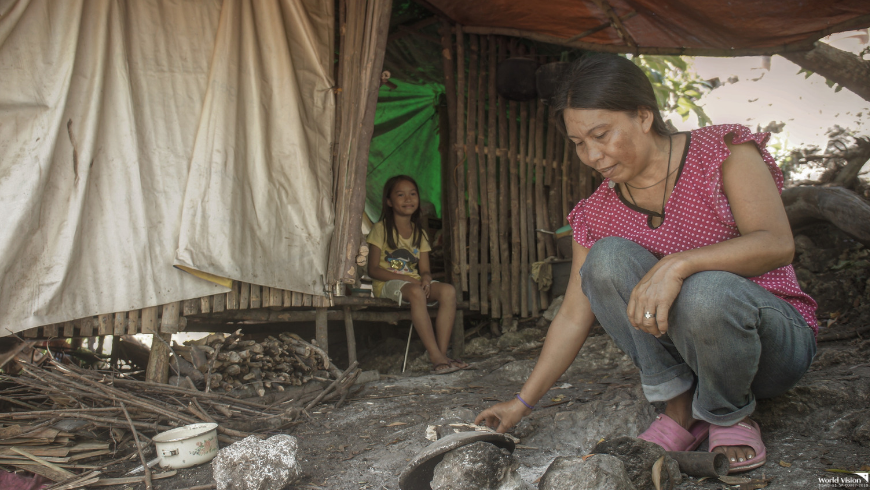 Anita’s relatives and neighbors came to their aid the morning after the incident happened. The men built a makeshift where they can stay temporarily.

In the morning, Anita’s relatives and some of the neighbors came to provide relief. They donated spare clothes and house utensils that the family can use temporarily. The men also built a makeshift shelter made of fastened bamboo rods as flooring and walls, and a tarpaulin as roof. Elizor, Anita’s husband, was away for his construction work. He also headed home soon as he heard the news.

The impact of the fire to John and Mary Grace was doubled compared to its impact to the mother. Both siblings would wake up in the middle of the night and be scared when they hear noises outside their makeshift tent.

Mary Grace, who is in her 10th grade, is a competitive student. She is a diligent learner. But when the incident happened, the child’s schooling was affected. She missed classes and even failed quizzes because she was distracted during that time.

She also developed a fear of fire. “I was very sad that our house was burned. I lost all of my school supplies and my favorite toys,” shares Mary Grace. “I also could not help my mother cook food because I didn’t want to see a fire burning,” she added.

The staff identified that the family needed support such as provision of stress debriefing, provision of relief items such as food supply and hygiene kits, referral to government agencies and immediate shelter intervention. The staff also submitted their case to the organization’s marketing team for fundraising.

The construction lasted for two weeks. In that span, the debriefing sessions, especially with the siblings, continued until they overcame their traumas and fears. 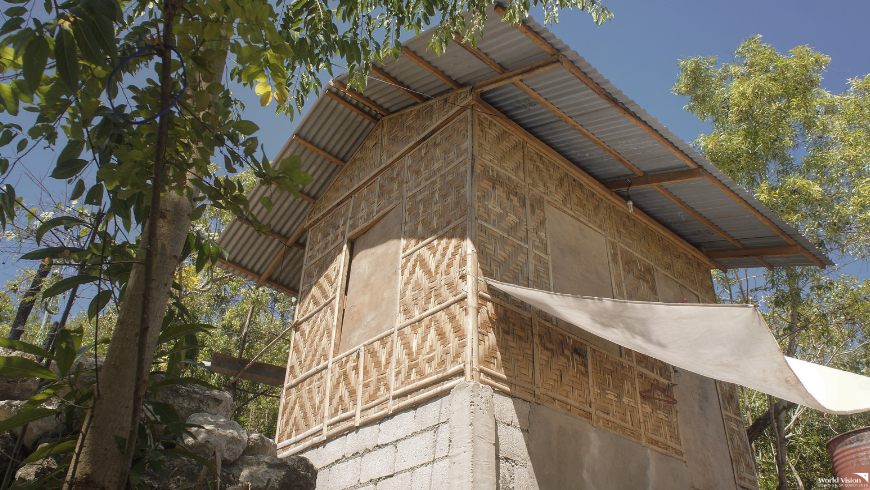 After 2 weeks, Anita’s new house is finally built. Thanks to the support from World Vision sponsors and the local government.

Four months passed, Anita and her children are living carefully in their new home to prevent the incident from happening again. Their electrical wiring is new and organized. They also unplug all electrical appliances, including the light bulb, at night to avoid overloading.

The lives of the children have also gone back to normal. Mary Grace is now back being competitive at school. “I am happy that we have a new home. I can study my lessons properly and I can sleep well at night. We also have new pillows, new blankets and I have new clothes,” the daughter happily shares. 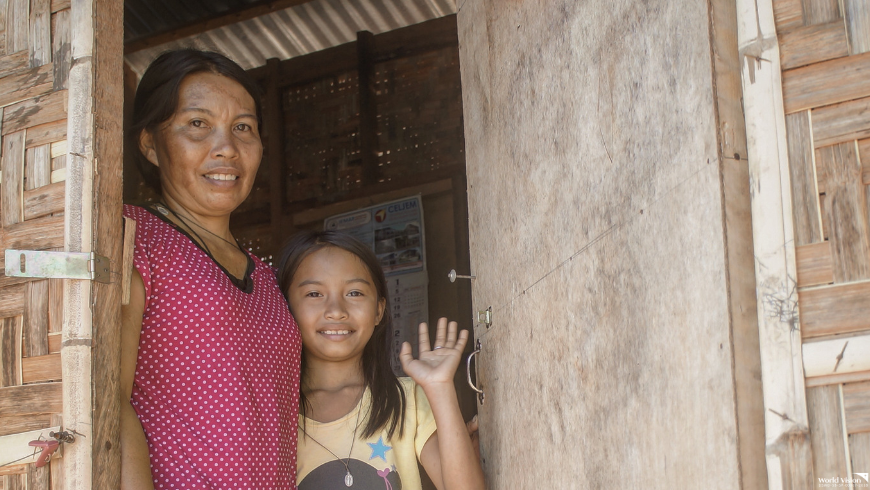 Indeed, Anita and her family has learned how to become fireproof. It doesn’t mean that they are longer immune with fire. It means that no matter how much heat they experience in their life, they will remain resilient. The family believes that they are strong because of the supportive community and generous people that are willing to help. 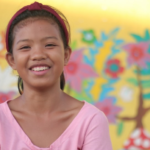 Nica hopes for a better tomorrow

Nica has been a World Vision sponsored child for several years. With the help of Nica’s sponsor, she is inspired to work hard on her... 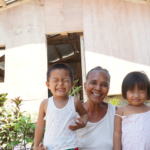 The promise of finishing school

Manuel, the then 9-year-old kid from North Cotabato, has changed a lot since we featured him in our Back-to-School campaign last year. 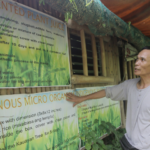 The Pangkaunlaran Development Association, Inc. (PDAI) has been present in the Isabela province for around 30 years already. Its aim is to provide development projects...