39-year-old Wilson Enbate sat quietly in the middle of the room, focused on the piece of clothing he was sewing, while his wife, 35-year-old Jennifer, sat by the table learning how to stitch bags.

Ignoring her husband’s playful comment, Jen says, “What takes him a minute to do takes hours for me.”

Wilson has been sewing bags for more than 10 years. It is the job he knows how to do best and he is proud to do it. He once worked in a garment factory.

It was a tough job, says Wilson. “The supervisor would yell at us and verbally abuse us if we commit mistakes. Everyone in the factory would hear you being scolded. It was humiliating at times.” Wilson earned Php200 to Php300 ($ 3.9 USD to $ 6.02 USD) a day at the factory.

Jen took every precaution to conserve the limited resources by putting a mental cap on the expenses for the family’s food consumption.

“There were times when we couldn’t buy what we wanted. We had to go hungry that day,” Wilson recalls.

Their situation forced them to borrow money from their relatives. Sometimes their kin would share food with them. “That’s how we survived,” says Wilson.

In 2011, World Vision and its community partner organisation in Cavite, Batong Sandigan Development Foundation, set up a sewing centre near Wilson’s house. The centre, produced various types of bags, pouches and wallets, providing an additional source of income for families in the community.

When Wilson was offered a chance to work at the centre, he immediately grabbed the opportunity. “It was a feasible option as its work station was closer to my home. I was able to save because I didn’t have to spend on transportation. Now I walk to the centre every day. I go home to have my meals with my family, so I no longer spend on buying meals. I was able to save a lot,” he says. For the past four years Wilson diligently worked as a tailor in the livelihood centre.

The idea of setting up a sewing centre came into being from a World Vision activity. “We were handing out emergency bags for children. Since sewing ran in the blood of most people within the community, we thought why not we create the bags ourselves? It will be much cheaper than buying them from a nearby mall, and at the same time provide a source of livelihood for community members,” says Gina Lovedice, Batong Sandigan Development Foundation chair.

“There used to be five big factories here that made clothes for export. Most families worked in those companies; my sister was one of them. But in the early 90s, the factories closed down and left many people jobless,” she adds.

Most people then looked for work in other towns. Some resorted to small-scale rag making and others to figurine moulding.

Despite their limited education in business management and only possessing sewing skills, the families assisted by World Vision now run a community sewing centre and manage its daily operations. From finding buyers to negotiating with sub-contractors and from computing the centre’s financial transactions to sewing the bags the community members manage the entire business process. 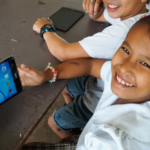 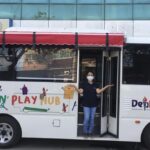 World Vision, partners with the Department of Education (DepEd) to launch a mobile library in Mandaue City. The mobile library aims to cater children on... 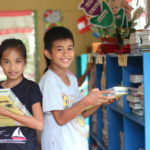 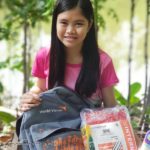 Aliyah prays for a COVID-free country

But the student is still hopeful that everything will get back to normal. “I pray that all people will follow the health protocols so that... 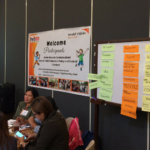 World Vision Development Foundation (WVDF) and the Department of Education (DepEd) share a common goal of upholding the safety and dignity of children. World Vision’s...