Home / News & Stories / The promise of a new life

The promise of a new life

*Danica is just one of the 60,000 to 100,000 children who suffered from trafficking and commercial sexual exploitation nationwide.  While poverty is one the common excuses why children her age are forced to work in the sex industry, there are other reasons. She did not plan to become a sex worker at the age of 12. She, just like any girl, had a dream.

“Things changed when my parents separated. I was being passed on so I ran away.”

With no food to go and no place to stay, she went to the disco houses of Cagayan de Oro and gave in to her friends’ nudging.

Cagayan de Oro is one of the three provinces in Northern Mindanao that has high trafficking incidence. The Commission on Filipinos Overseas Task Force against Human Trafficking 2008 report shows that 38% of trafficked people are from Bukidnon, 35% are from Cagayan De Oro and 11% are from Misamis Oriental. Of the 138 cases recorded, 117 are children.

“They say it’s easy money but it’s not. I felt dirty after that night. I felt dirty in the next months and years that I had to do that but when I started to pay for my apartment and buy good food, I could no longer stop,” she admits.

Her vulnerability was continuously taken advantage of by pimps. From rummaging the streets and disco bars, she became a freelancer. Every night, she would receive a text message from her handler, someone she only knew by an alias. She got at least P2,000 to P3,000 every time. To ease her guilt and to forget what she has become, Danica turned to drugs and solvent.

“My pregnancy was the last straw. I was already planning on quitting even before it happened, thanks to the patience of the volunteers of TISAKA,” she says.

TISAKA or Tingog sa Kasanag is a local organisation that focuses on women and children who are survivors or at risk of prostitution, trafficking and abuse. It is one of World Vision’s partner in the implementation of Teaching Health and Resilience to Children through Inclusive Values and Empowerment (THRIVE) project, an initiative funded by World Vision Germany to improve the resilience of children to respond and recover from harmful conditions, including sexual exploitation. The project is implemented across Cagayan De Oro, Bukidnon and Misamis Oriental where World Vision has been doing development work for 16 years.

Danica was reached out when she was turning 16. Staying at a temporary shelter, she underwent psychosocial interventions, counselling and HIV andAIDS testing. It was not easy.

“I was in and out of the shelter. Having people genuinely care about me was something I was no longer used to. They would text me regularly and whenever I go back, they still show the same love and concern,” Danica smiles.

“There are many children like Danica who are already in the shelter but would sometimes run away and go back to the streets. Each girl has her reason,” she adds. World Vision is also working closely with the City Social Welfare Development Office of Cagayan de Oro to further address the needs of the rescued girls.

The thought of having people care about her welfare melted Danica’s grounds.

“The different counseling sessions also showed me how badly hurt I was with my parents’ separation. I used to think that this was my revenge to them. I was too focused on my anger that I never saw other people taking advantage of that grief,” she says, adding that it’s only recently that she started holding herself accountable for the things that happened to her. She then showed her scarred hand saying that she tried to harm herself with a blade when her parents separated.

She adds, “When I started admitting it to myself, I realized that at least it’s not yet late.”

Danica now lives with her partner who was also engaged by World Visionin the THRIVE project’s Skills Training a livelihood arm in partnership with the City Social Welfare Development and Community Improvement Division Office of Cagayan de Oro. He will be taking a national certification in the next months. The certification will not only allow him to land a better job in the city. It will also increase his chances of getting a job abroad, which he and Danica have been dreaming of.

“There are times when I watch my baby sleep and I whisper to her that she will not become like me; that I’ll try to leave my old ways so she’ll be proud of me,” she dries her tears. *Name was changed/World Vision/June 20, 2017 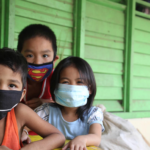 World Vision on COVID-19 pandemic: Do not forget vulnerable children

Pandemic declaration demands the world to focus on those who are invisible and most at risk from COVID-19, warns World Vision 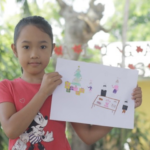 Hilarey, a 9-year-old sponsored child and aspiring teacher from Isabela, is always excited for Christmas. She associates this season with love and happiness. Hilarey lives... 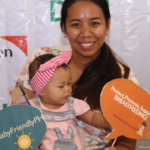 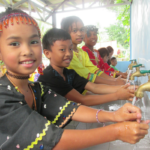