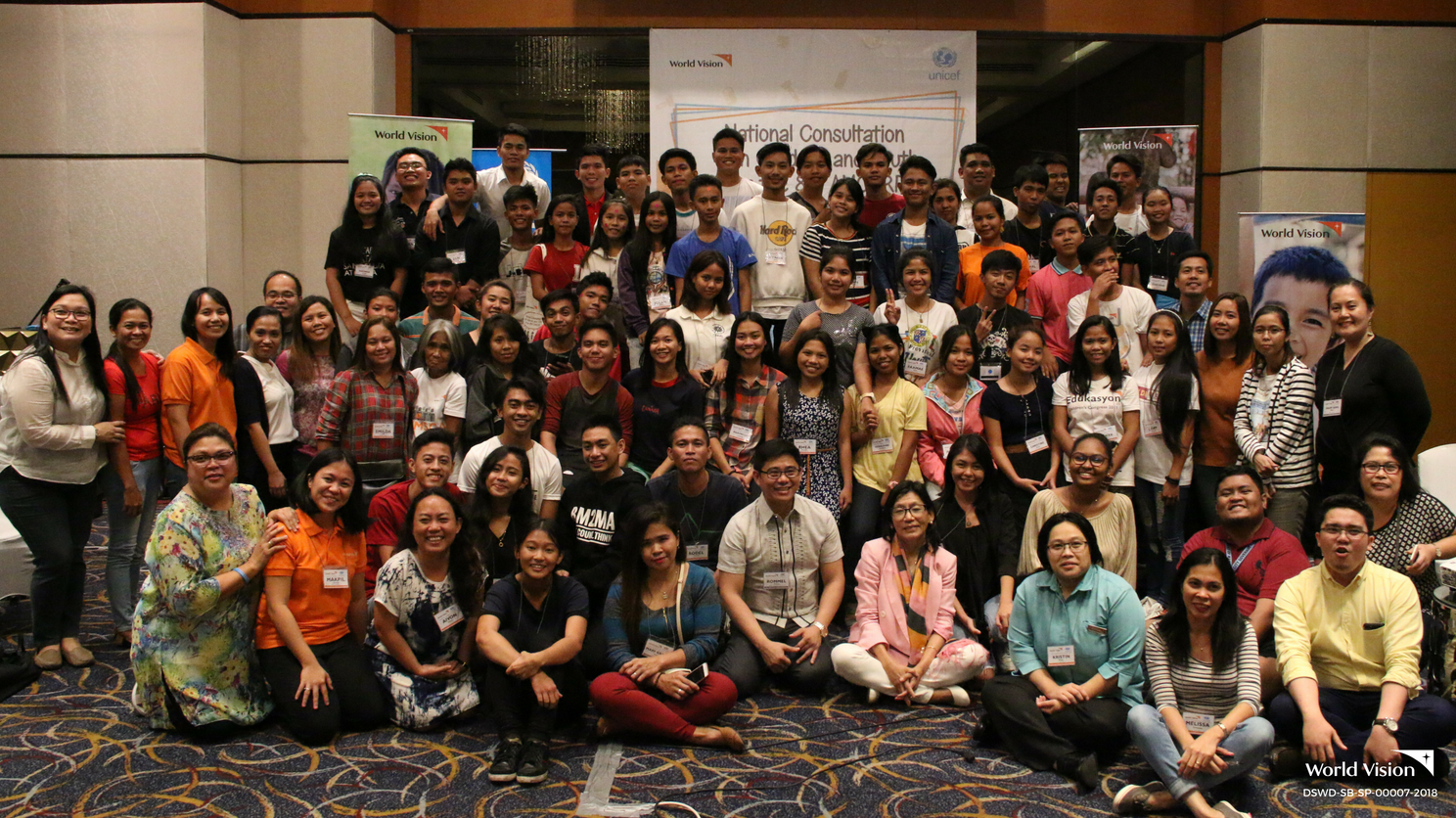 Fifty youth participants from across the Philippines gather to discuss how they can play a substantial role in mitigating disasters and promoting resilient community.

For Angela, 18, a Sangguniang Kabataan councilor from Quezon City, it is important that the voices of the youth are recognized and included on important issues like Disaster Risk Reduction.

She is one of the 57 children from all over the Philippines who gathered in the National Consultation with Children and Youth on Disaster Risk Reduction to discuss the important role of Filipino youth in mitigating disasters and promoting resilience. 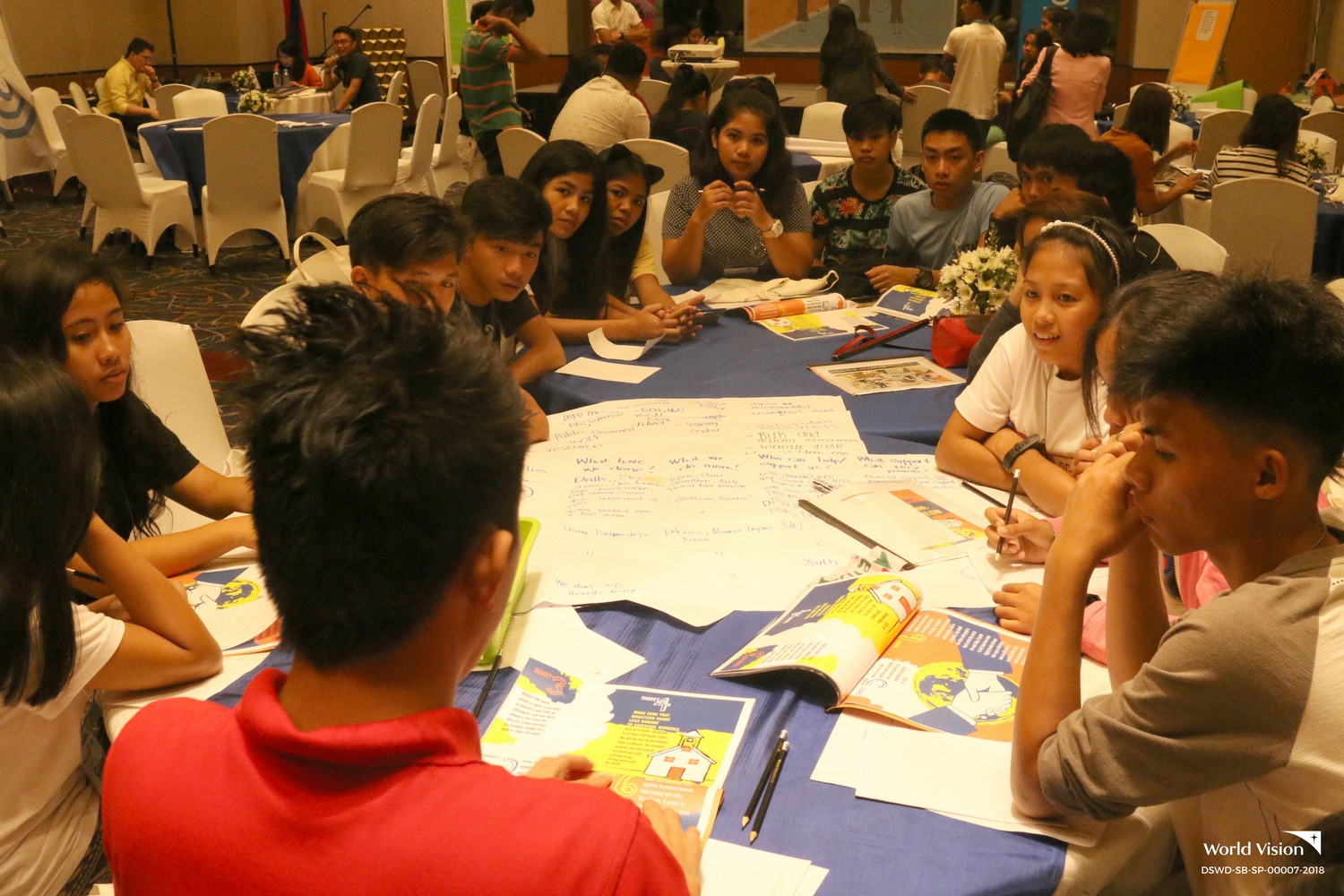 Youth participants discuss their inputs and recommendation for the unified statement that they will present to officials of key government agencies and representatives from World Vision and UNICEF.

UN children’s agency UNICEF and World Vision organized the forum to gather the input of the youth for the Asian Children Ministerial Conference for Disaster Risk Reduction (AMCDRR)’s 8th year that was held in Ulaanbaatar, Mongolia last July 3-6, 2018.

“I feel very proud and empowered because children and youth were able to show how massive is our potential to be a contributor of greater causes such as Disaster Risk Reduction,” Angela added.

The workshop also gave the young participants an opportunity to learn the Sendai Framework of Action, a global agreement comprised of 7 targets which aim to collectively track and reduce the loss of lives and increase national disaster resilience among participating countries, including the Philippines, by 2030.

The Philippines ranks third as the most disaster-prone country in the world due to the frequent occurrences of typhoons, the presence of tectonic faults and active volcanoes all over the country.

Disasters have placed a tremendous burden on children and youth, the most vulnerable sector in times of disasters. According to the Census of the Population 2015, children aged 0-15 constitutes 31.8 percent of the country’s population, the largest among all the age groups.

Emmie, a World Vision sponsored child, said it is important to prepare and empower younger generations when it comes to disaster risk reductions. Her hometown, Misamis Oriental is one of the 23 provinces identified by a World Bank report at high risk for disasters due to hazards of climate change.

Last year, around 240 families or nearly a thousand individuals fled their homes after Tropical Depression Urduja hit two towns in Misamis Oriental on December 14. Four municipalities had suspended classes due to flooding.

“It is important that we know what to do and how to help in times of disaster,” said Emmie. 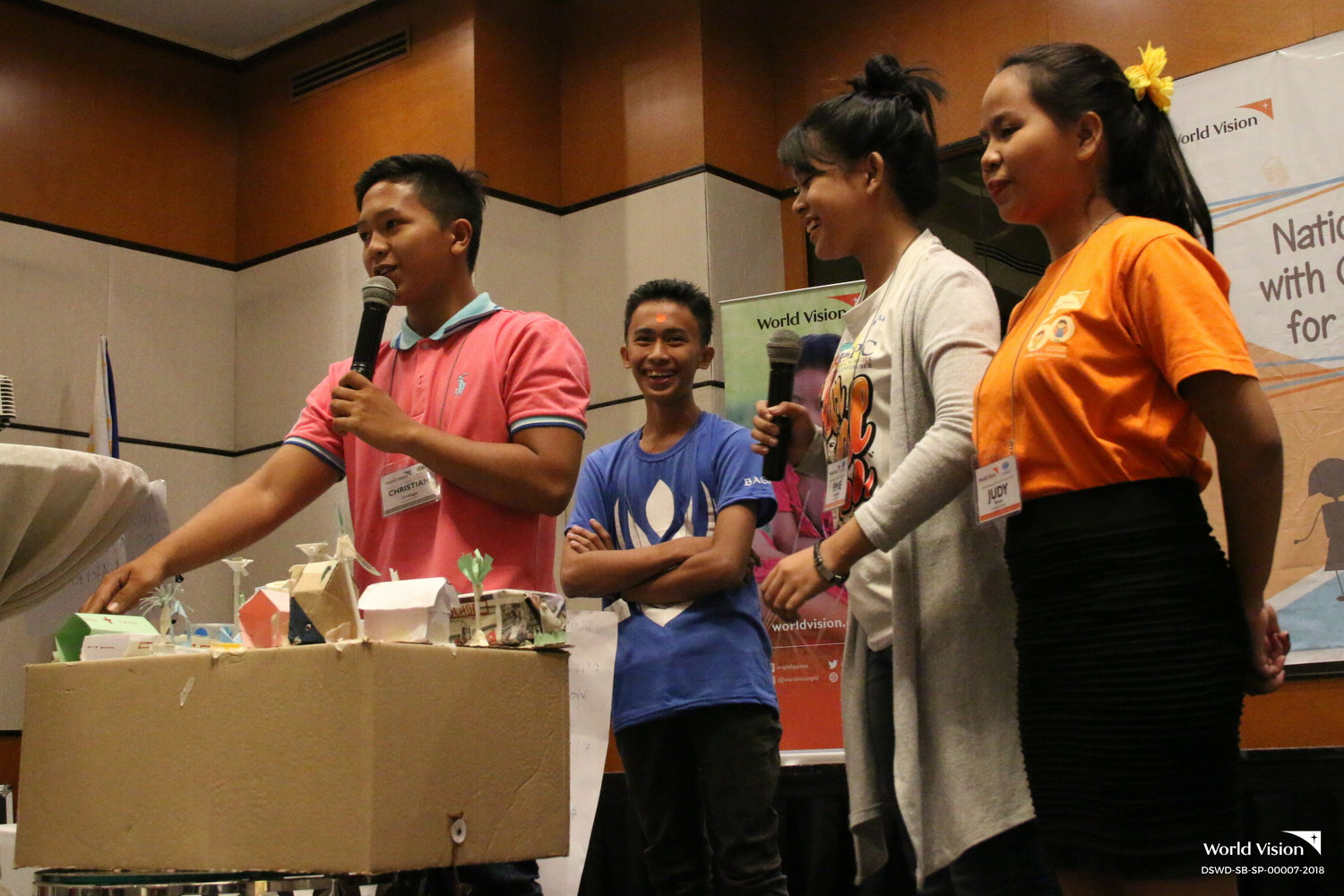 The participants present their artwork illustrating how they envision a disaster resilient community.

Emmie, together with other young participants, prepared presentations through arts and performance expressing children’s issues related to disasters in their own communities. She also attended dialogues and lectures that familiarized her on concepts related to disaster risk reduction.

“It was very fulfilling to see the diversity of DRR strategies across different municipalities and places in the Philippines. I am happy that I was able to take part in this initiative. It is better to include the children and youth because sometimes we are not heard at all,” said Emmie.

The National Consultation with Children and Youth on Disaster Risk Reduction provided children with a conducive platform to share their thoughts and issues on improving disaster risk reduction involving the youth.

For Angela, being an advocate of Disaster Risk Reduction is a lifelong commitment. She wants to maximize her position in Sangguniang Kabataan to push forward projects and actively participate in disaster preparedness and risk reduction activities in their community.

“It’s our plan to establish a Batang Emergency Response Team within the community because we want to empower the youth. We also want to echo the DRR strategies. We want the community to learn about this because we find it really effective,” said Angela.

Advocating for children’s involvement in DRR and Climate Change Adaptation initiatives give the youth an avenue for their voices to be heard and opportunities to influence and improve policies.

Angela along with other participants asked key government agencies, including the National Disaster Risk Reduction Management Council, Office of Civil Defense, and the National Youth Commission, to document children affected by disasters and account for the economic impact to children. 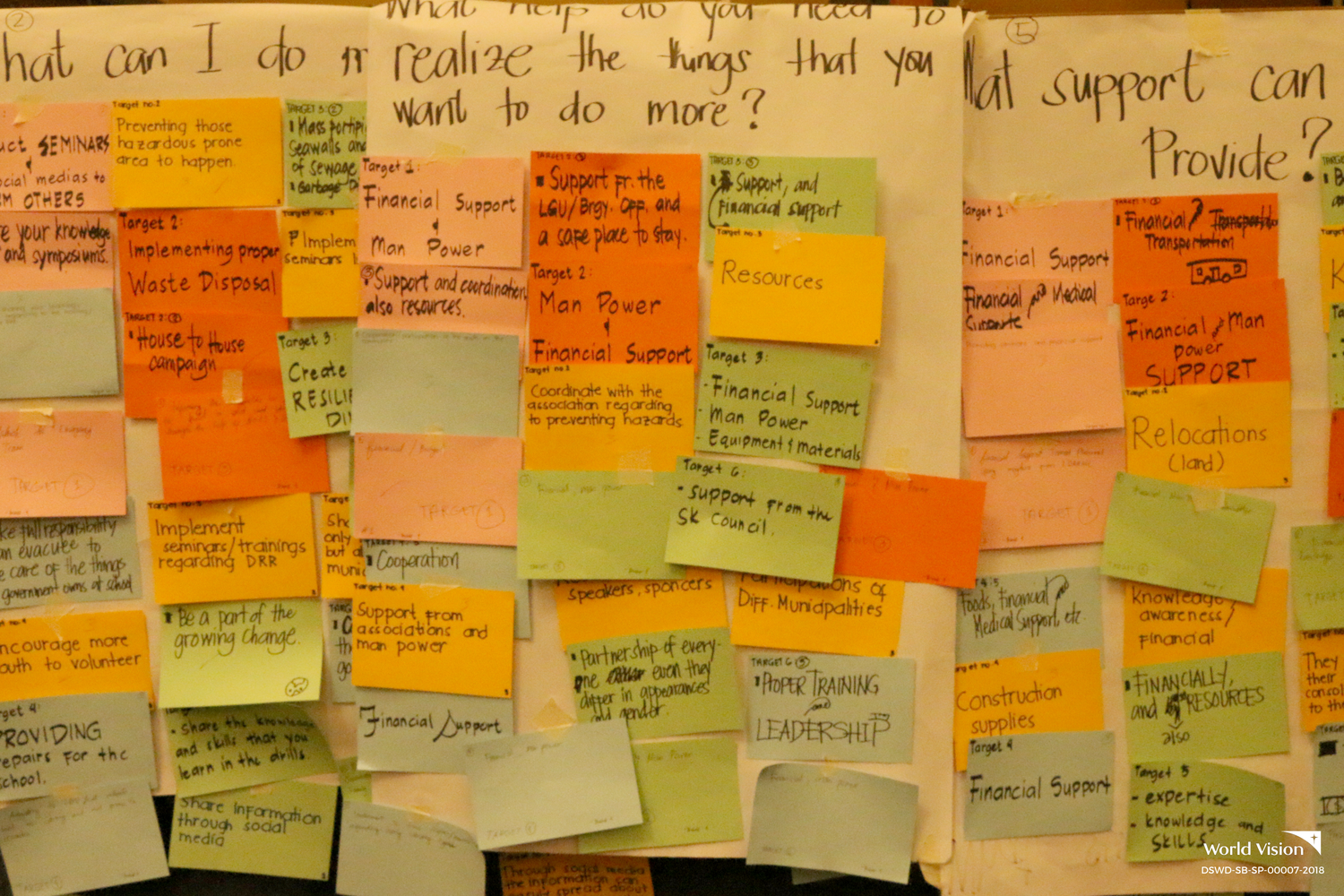 Inputs and recommendation of youth participants for the unified DRR statement posted on metacards. 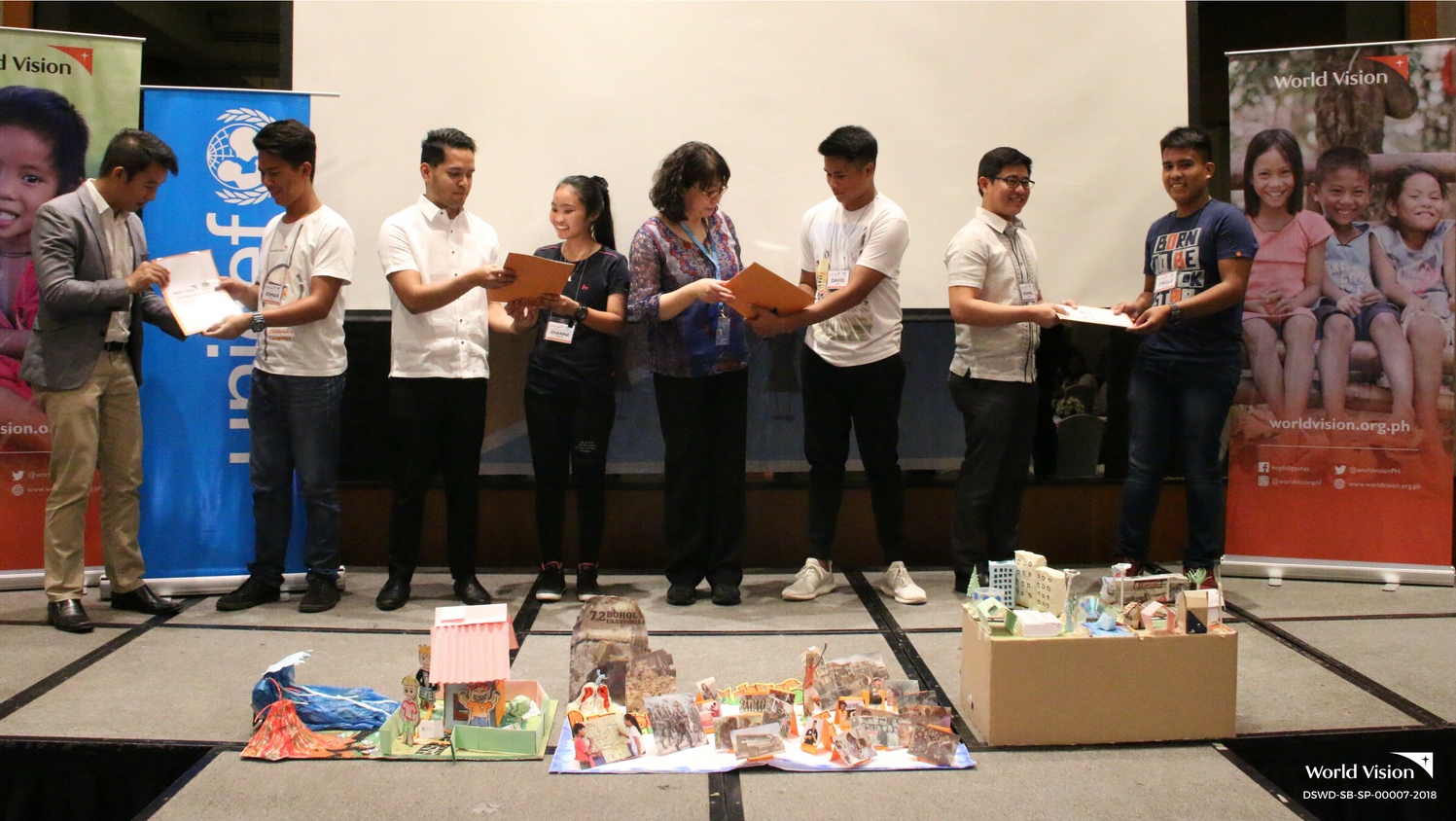 World Vision presented the youth participants’ unified statement calling the leaders and concerned groups for the deliberate involvement of children in the DRR agenda which included the need to document children affected during disaster, account the economic impact of disaster to children, raise awareness on policies and campaigns promoting DRR, allocate budget for child-focused DRR activities, and engage children as active contributors in devising and implementing early warning systems in their communities.

“It is undeniable that children are the most vulnerable during disasters and emergencies. If we don’t involve them to be resilient and more proactive, all our DRR initiatives could only go so far. Youth participation is pivotal in ensuring our efforts are adaptive to their context and capacity to mitigate disaster risks,” said World Vision’s national director Rommel Fuerte. 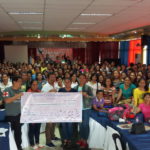 Community managed savings and credit groups association (CoMSCA) members from Quezon, Bukidnon donated P16,716 to World Vision as their way of giving back to their... 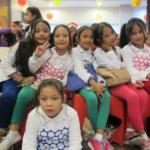 ING Bank Manila and World Vision celebrates Christmas with close to one hundred fifty students of the ING Learning Center. 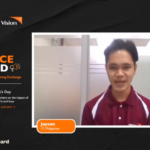 Concerns and Recommendations on Education Amid the Pandemic 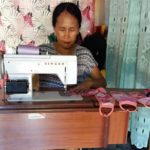 Empowering children’s caregivers is at the heart of World Vision’s sponsorship program. The organization believes that when a child’s parents or guardians are given the...