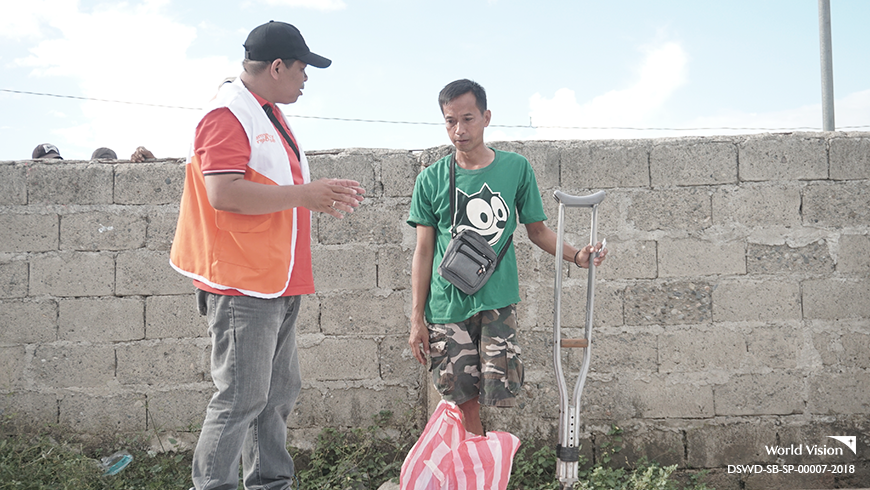 Cagayan Province – When Typhoon Ompong (international name Mangkhut) hit the Philippines in September, it affected the lives and livelihood of many families. World Vision was already on alert while the typhoon was ravaging the northern part of the country. After the typhoon exited the country, World Vision promptly deployed assessment teams to affected areas and provided relief assistance with its prepositioned goods.

The organization is currently on the third month of its Typhoon Ompong Response. It has initially provided shelter materials, corn, rice and vegetable seeds, and non-food items to families in selected areas in the province. 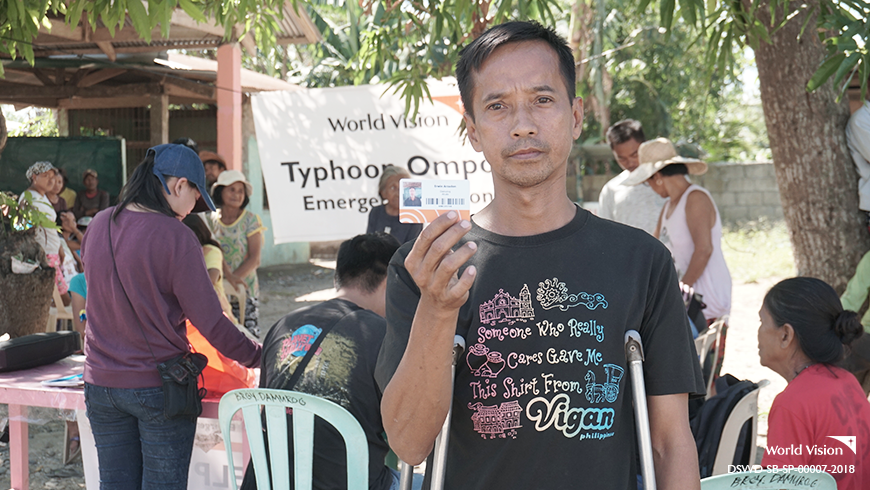 Erwin, a PWD, proudly holds his Last Mile Mobile Solutions (LMMS) card that signifies that he is a beneficiary of World Vision’s Typhoon Ompong Response

Part of World Vision’s qualifications of identifying beneficiaries is the vulnerability of an individual or a family. The organization prioritizes the most vulnerable sectors of the affected population. These include persons with disabilities or PWD, senior citizens, solo parents, pregnant women, indigenous peoples or IPs and many more.

One of the beneficiaries is Leonila, 37 years old and a mother of two children. She has a physical condition where she can’t straighten her knees causing her to walk in a squat-like position. According to her, she started to lose her ability to walk normally when she overdosed with medicine when she was still a child. Her husband works as a farm laborer who earns below minimum wage.

As a World Vision response beneficiary, she received shelter materials such as galvanized sheets, boards of plywoods, lumbers and carpentry materials. She also received vegetable seeds that she can use for their supply of food and for extra income. During distribution, World Vision also assigned volunteers to aid beneficiaries who cannot carry and load their received goods. 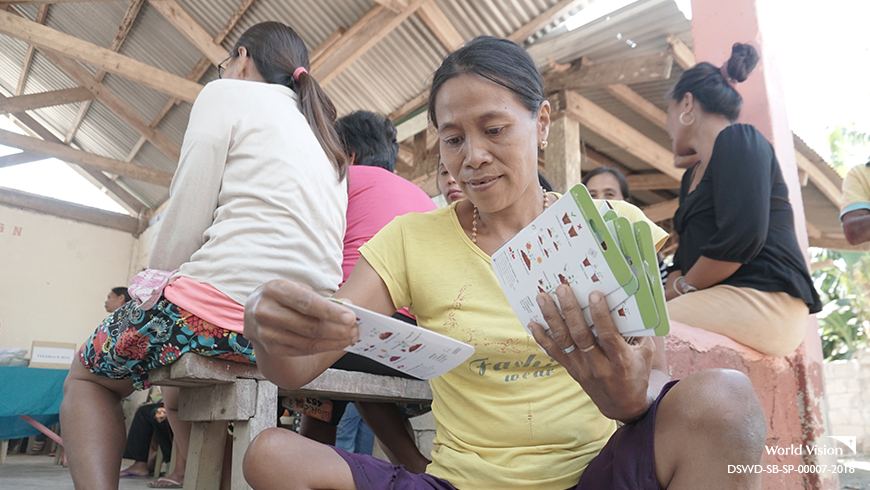 World Vision also reaches senior citizens who are head of their household. One recipient of shelter materials is Amado. His former house, made of light wooden materials and ­nipa, took a huge damage caused by the typhoon. After receiving shelter kits, his house has improved to a bigger and stronger one – with new walls and roof.

“I am truly grateful with World Vision’s support for us affected by the typhoon. I wouldn’t be able to build a new house if I didn’t receive the shelter materials,” Amado, a senior citizen, shared. 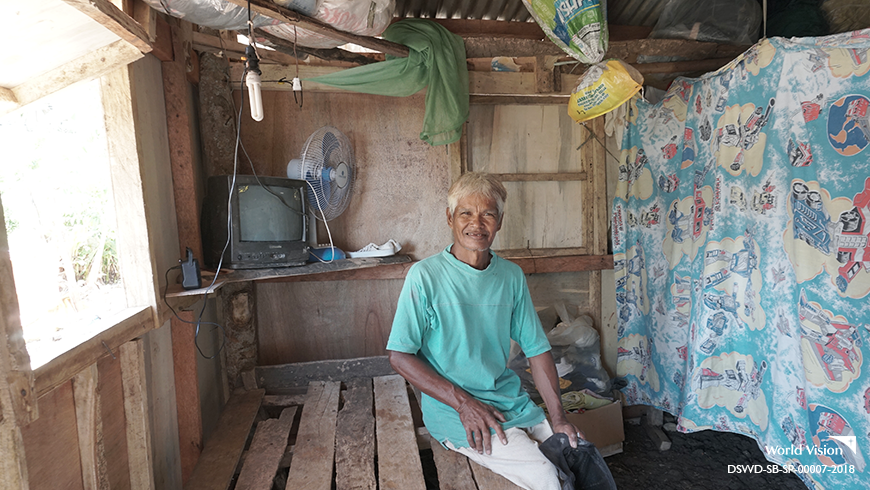 Amado is happy with his newly repaired house. It is much wider and stronger compared to his old one. He lives his wife and one of his grandchildren inside the house.

The inclusion of Indigenous People

World Vision ensures that members of indigenous tribes are not left out of the process. In one of the areas responded by World Vision, there is an Aeta village with 12 households. Aeta are indigenous people who live in scattered, isolated mountainous parts of Luzon. They received shelter kits and corn seeds for their recovery.

Their leader shared how their inclusion in the response affects them positively. “The tribe members are always delighted when they receive relief items,” shares Milagring. “They are proud to have the ID (LMMS Card). It makes them feel that they belong,” she added. 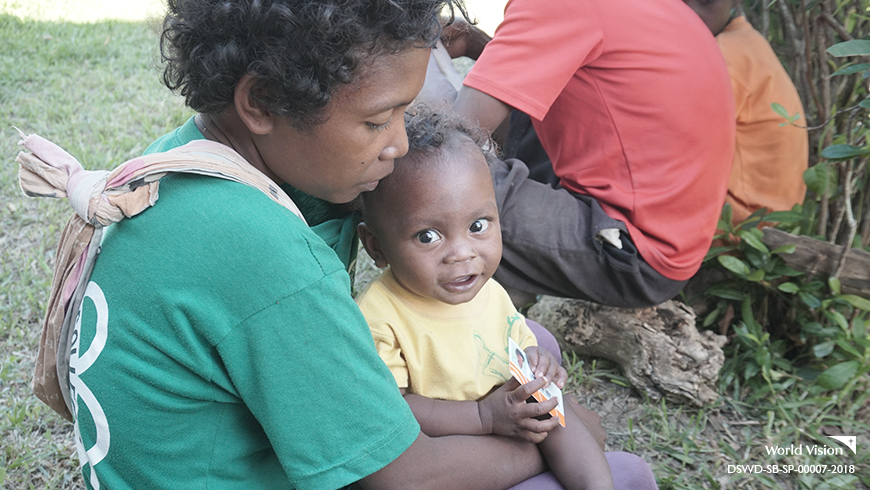 An Aeta mother and her infant wait for their turn to receive their coco lumber during a World Vision shelter kit distribution. 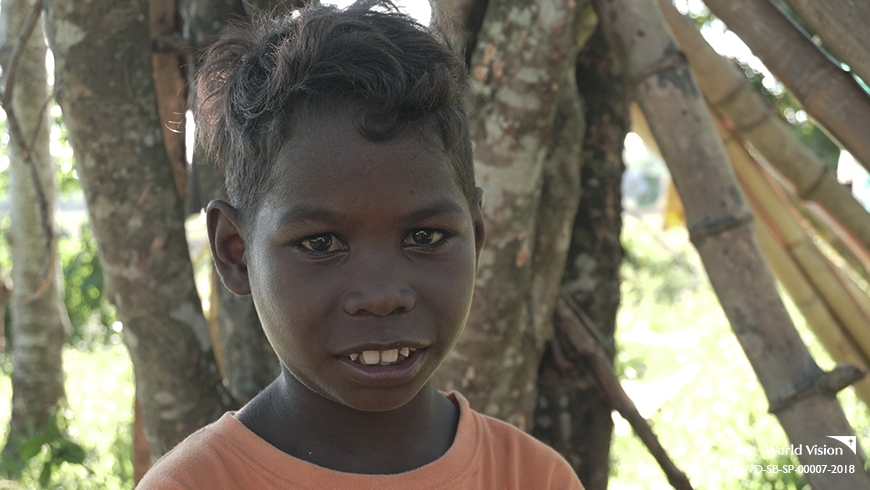 Hesus used to live inside temporary shelters made of scavenged lumbers and branches with leaves. With the shelter materials his family received, he can now live in a permanent settlement. The 10-year-old Aeta boy dreams to become a policeman someday.

World Vision’s Typhoon Ompong Response continues in the coming months. The beneficiaries are grateful for the donors who supported the organization’s work. Many works are still needed as the response reaches more communities in the province. With your generous support, we will aid more typhoon-affected individuals, especially the most vulnerable ones. 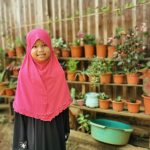 10-year old Salma was forced to quit school after she finished Grade 1 due to extreme poverty. When World Vision started its sponsorship program in... 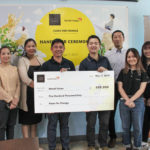 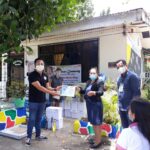 Dr. Matthew Yap, an oncologist and a major donor of World Vision donated 10 boxes of bond paper and a set of gardening tools to... 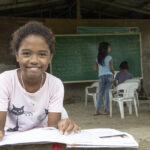 Helping a girl child cope with her present situation

World Vision sponsored child, Nepaline received a workbook that helps her look at the brighter side of their family's life amid the pandemic.