Home / News & Stories / World Vision, a Blessing to My Life

I grew up in a family and environment where everything was limited except to dream. My dream at that time was to graduate in college and to get a good job someday. My father was a farmer then and my mother was working as a government contractual employee in Burgos, Siargao Island. We are eight (8) siblings in the family and I could really say that my parents had difficulty in meeting our basic needs and more so in sending us to school with their meager income. On the contrary, they still managed to send us to school but with so much debt from other people. In our community, we have heard a lot of bad things thrown against our parents like “why do they keep on sending us to school despite of our situation”. But our parents just simply told us that they have nothing to give us other than education and so they will do everything just to give it to us.

Yes we are poor and we live a simple life yet we have a happy family. But it doesn’t mean that if we are born in a poor family, we can’t change our life status. We have a choice whether to remain on that kind of situation or change it. With hard work and dedication, we can change the course of our lives, which by the grace of God we (our family) have done so. I am not saying that we are rich this time but I can say that the food we serve now in our dining table is no longer a dilemma. Together with my siblings, we already build our dream house for our parents and I also have my own house as my investment in Butuan City while working abroad. 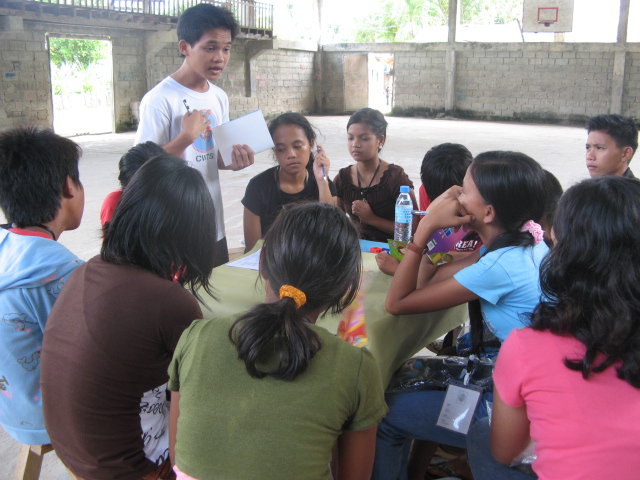 I remember every time the school year started during my elementary days, I always felt jealous to my classmates who had their new school uniform and school supplies. This was the usual scenario every year until World Vision came to our community. In year 2002, I and my younger sister became a Sponsored Child of good-hearted people from Australia. Since then, big changes happened to us and I had a lot of memorable experiences brought about by their sponsorship through World Vision:

EDUCATION –   miscellaneous fees were no longer a problem for my parents because World Vision paid for it with the support of my sponsors. Moreover, we received school supplies and school uniform every year before the school year started. World Vision also supported me financially when I was in high school as I represented our school as SSG President during the Mindanao Student Leaders Congress in Butuan City.

SPIRITUAL GROWTH – since World Vision is a Christian organization, we had regular bible studies together with the other sponsored kids. We learned a lot about the Lord, how to pray and how to read the bible properly.

DEVELOPED TALENTS – to hone our talents, SARIMBANOG which means Sayaw (dance), Arte (acting) at Tunog (music) was organized by Surigao Norte People’s Initiative Development Association (SNPIDA) – World Vision for those who passed the auditions in singing, acting, dancing and playing any musical instruments. We were trained by professional directors, after which we were sent to perform at different municipalities in the province of Surigao del Norte during summer time in the year 2007 to showcase our talents.

CHILDREN’S CONGRESS – There were Barangay Children’s Association (BCA) in every community and they were sending selected students (particularly the officers) to attend the Children’s Congress. Back then, more than 50 children-leaders from different communities came to join the said event every year. I was one of those who were regularly sent to that event. Topics and activities were about saving mother earth, leadership, events planning and organizing.

MEDICAL OPERATION – SNPIDA-World Vision organized medical activities for all the sponsored kids. They brought medical professionals in our community such as Doctors and Dentists to conduct check-ups, consultations and dental operations for free.

RECOGNITIONS – for the sponsored kids who graduated and who finished the school year with honors just like me as a consistent honor student from elementary to high school, the foundation gave a personalized medal which was given during the school’s closing program.

CHRISTMAS PARTY – every December, we had Christmas party and we always enjoyed it because we received gifts and noche buena package from our sponsors and from World Vision. We usually attend the program together with our parents.

In return to the generosity of my couple sponsor from World Vision Australia namely Margaret & Steven, I always did my best on my studies. I graduated in elementary as 1st Honorable Mention in 2004 and did better when I was in high school ending as the Class Valedictorian in 2008. Because of that, I got a scholarship for my college studies. My talents and skills which were enhanced through the different events and trainings with World Vision helped me a lot on my studies and school’s extra-curricular activities. That is why I became a consistent student leader and a student journalist. Being active both in the University & in our community, it gave me a chance to get another foreign scholarship from Switzerland under Edward & Eva Underwood Charitable Foundation (EEUCF) that covered all my educational expenses with monthly allowance until I graduated. I also got scholarship assistance for three semesters from our Municipality Mayor Sulueta P. Rayos during her term in our town.

In preparation for my on-the-job training to equip myself for the real world, I decided to look for a part time job.  I had an opportunity to work as an Assistant Banquet Manager in Hotel Tavern Surigao for eight (8) months. Prior to my college graduation with the degree of Business Administration major in Marketing Management in St. Paul University Surigao, I rendered my internship in World Vision Philippines in Quezon City as it was my desire to give back. As a Sponsorship Associate-Trainee for 2 months, I realized how blessed I was and grateful for all those people who worked hard to help underprivileged children like me. 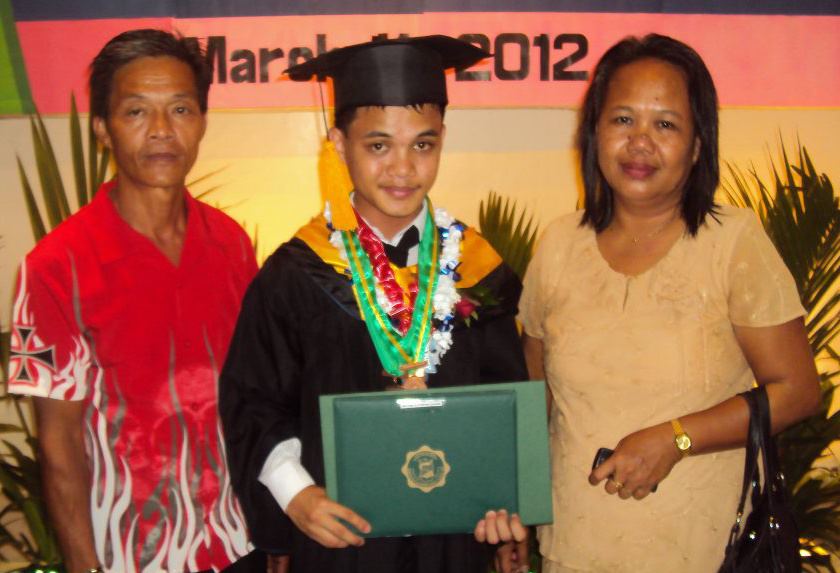 During our college graduation, I received the Organization Leadership Award, Journalism Award, Performing Arts Award, Community Involvement Award and Athletics Award which all made me feel more accomplished.  By the grace of God, the day after our graduation I received a lot of calls for job offers but I decided to choose World Vision Philippines to work for as Sponsorship Associate and worked with them for one (1) year. I really worked passionately there because it’s not just about earning money but it’s all about giving hope to those kids who don’t have a sponsor yet.

Then in 2013, I became an Overseas Filipino Worker (OFW) in Doha, Qatar as a Teller in a financial firm. I worked there for three years which made me capable enough to support my younger sister in college until she finished her studies. Then year 2016, I moved here in Dubai, UAE and working again as a Teller for 2 years. Just last November 2018 up to present, I’m working as Tax Refund Officer in Dubai International Airport.

As of this time, I have established advocacy for our local community called “BAYANihan Back to School Project” which I started August 31, 2016 with 10 Sponsor Kid’s in Siargao Island. Now we have 52 Scholars from secondary with different individual sponsors coming from my friends in Qatar, Italy, Korea, UAE & home country – Philippines. My vision for the program is to provide access to education for underprivileged yet deserving children, to develop the kids’ potential for a brighter future, and to help the children to be closer to God. We paid the full amount of kid’s school fees and we also provide their school supplies.  Because of this advocacy, we received recognitions from Department of Education in Siargao Island District for two consecutive years from 2018 and 2019. Also, I was one of the first recipients to received Rizal Awards last January 2019 given by Filipino Institute here in Dubai, UAE.

While working here in Dubai, I studied short course for HR and Admin in Filipino Institute for almost a year.  I was awarded as Top 2 for Basic, Top 1 for Intermediate and Leadership Award for Advanced level. Also, I studied online for my second course as Units Earner for Education and by God’s grace I passed the Special Licensure Examination for Teachers (LET) here in abroad last August 12, 2019 for BSED Major in Social Studies. This year, I’m one of the coordinator in conducting reviews to aspiring OFW’s here in United Arab Emirates who wants to become a Licensed Teacher.

I am thankful to World Vision because what I achieved in life, it has a big impact on it. I know how it felt to have nothing that is why I have the desire to help. Now, I am grateful that I am also a Child Sponsor of World Vision Philippines for two years. Indeed, we can make a difference in our own little ways by helping others to make their life more meaningful. Forever I’ll be proud to say that I was once a Sponsored Child of World Vision.

Thanks be to God! 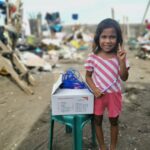 Children bear the brunt of typhoon Goni. They also have become more vulnerable to various risks, including the ongoing COVID-19 pandemic. 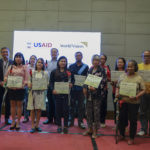 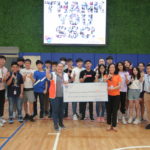 Students from the Singapore School Cebu (SSC), an international school based in Mandaue City, raised a total of P272,290 during its 3-day Casual Days for... 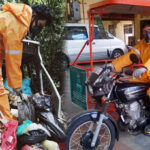 Empowering Waste Workers and their Communities

Recognizing the challenges and the vulnerability of waste workers, World Vision and Eco-waste Coalition, with funding from the German Federal Ministry for Economic Cooperation and...